How to be a forward-thinking financial services business

Prepare to lead the future with our upfront advice on seeing the opportunities others don’t.

Your grocery store became your bank?

Your retirement fund merged with your favourite clothing retailer?

Ok, not even Upfront podcast guest, near-futurist and trend curator Rohit Bhargava knows if there will be a Nike Retirement fund (some folk might say their sneaker/trainer collection is their retirement fund) but he says these are the sorts of questions that financial services businesses need to be asking to be prepared for the future.

With many industries struggling to innovate and facing increasing disruption, Rohit is on a mission to inspire more ‘non-obvious’ thinking in the world. The type of thinking that led to Taco Bell opening hotels, Crayola producing make-up, Red Bull becoming a media empire and Capital One opening coffee shops. It’s something he says will help businesses be more resilient and lead the future.

So buckle up and get on board for some fast-thinking advice to take you into the (near) future.

SCREAM IF YOU WANT TO GO FASTER

Just because you’re a financial services business and probably more on the risk-averse side doesn’t mean you can’t be a forward-thinker says Rohit.

“Regulation doesn’t give anyone a licence to say, we don’t want to be innovative, or we should always be second because at the end of the day, in every industry, there is always an early mover and there are always late movers.”

The question is, how fast do you want to go?

“The real challenge for any organisation is to say, how fast do we want or need to evolve and what level of disruption are we comfortable with? And that comes down to the leadership of that particular organisation. How forward-thinking are they and, honestly, how much do they care about how competitive that company is in ten years?”

So what’s holding you back?

“Our whole incentive system is set up for short-term results, and that mindset holds companies back from long-term visionary success. It's why companies like Amazon win - they have a leadership that can afford to say, how is this going to play out ten years from now and a long-term mindset that other companies don't."

Are you stuck in your ways, lacking ideas and inspiration? It could be because your perspective isn’t diverse enough.

“I've spent a lot of time building a brand around this idea of being non-obvious as a person,” says Rohit. “It means you see the same things that everyone sees, but you don't think the same thing because you have so many different sources of input and you have so many diverse perspectives that you're paying attention to that you're able to see what I call the non-obvious. It’s the thing other people look at but don't see because their perspective is not diverse enough.”

According to Rohit, anyone can train themselves to be more open-minded. You just need to get outside of your world and into the mindset of someone who’s nothing like you.

“That’s a skillset we can intentionally build in ourselves, and it’s based on having more empathy for people who aren’t like you. Broaden your diet of what you pay attention to - whether it’s TV, radio, podcasts, magazines or books - just open your mind a little more to something you otherwise never would have consumed.”

This, he says, will make your business - and the world - a better place.

“I believe if we had more leaders and more of us who were open-minded, it would change the world because a lot of conflict in the world happens because people don't understand people who don't think like them.”

Broaden your diet of what you pay attention to - whether it’s TV, radio, podcasts, magazines or books.

Rohit spoke on the Upfront podcast about seeing “so many” industries getting to a point where they feel like they’re not innovative, getting left behind and disrupted and asking “why is it happening to us?”

His answer? We’ve created a monster.

“When we get into a particular industry, we develop expertise in that industry, and that expertise comes from paying attention to what’s happening in that space. As people build more expertise in that area that’s a selling point, it advances their career. We want people who are experts. But the problem with this kind of expertise bias is that it says it’s a waste of my time to pay attention to things happening in other industries. I work in financial services, I don't care what happens in retail that's not relevant to me. As soon as we take on that mindset, we're shutting out potential new ideas from other places because we're laser-focused on our industry. By raising this entire generation of professionals trained to focus only on the industry they’re in, innovation doesn’t happen, and outside ideas don’t come in.”

The advice from Rohit is simple: consume information outside your industry.

How does Rohit Bhargava the #1 Wall Street Journal and USA Today bestselling author of eight books, keynote speaker, professor and entrepreneur find the time to follow everything that’s happening in the world and predict what’s coming?

He makes it a habit.

“We’re all struggling to figure out what to keep up with and pay attention to. Part of it is knowing right away if something is a waste of your time. Instead of watching TikTok videos or scrolling Twitter, spend that time finding the most interesting stories of the week and saving them to your phone. That’s what I do every single week. I’m spending six hours every week reading stuff that is unrelated to anything I’m working on. It’s become my habit, and it’s why I find so many things people aren’t paying attention to.”

Before you know it, you’ll be a trend spotter too.

“A story I found three months ago might relate to something I saw yesterday, might relate to something I see three weeks from now and all of sudden you see there’s a trend happening there. Over time you get better at consuming information, that’s how our brains work. You don’t need a special talent to see things, you just have to give your brain the right input to think that way.”

On the Upfront podcast, Rohit described five behaviours of ‘non-obvious’ thinkers - those who can see things others can’t.

“The first one is to be observant. Pay attention to details - walk down the street with your head up, not on your phone. The second is to be curious, ask bigger questions and think about what things mean. The third is to be thoughtful and take the time to pause. The fourth, be elegant, when you describe something be very specific about it.”

And if you’ve ever had a great idea in the shower, you’ll already be familiar with the fifth one.

“The fifth one is to be fickle. Sometimes people don’t understand this one. Fickle means take an idea, save it and then move on. It’s the equivalent of working on something hard and reaching an impasse. Then you go and take a shower and get the brilliant idea. It’s not because of the shower, it’s because you gave your mind a break and the space to think.”

Over ten episodes, we’ve talked about the challenges facing financial services that are stopping them from moving forward. 14 guests from inside and outside the industry have brought their bold and frank take on issues like financial literacy, accessibility, education and customer experience, providing answers and advice to help build financial services businesses that more people can love.

This final episode in the series brings us full circle. Rohit’s call for more diverse and forward-thinking in financial services echoes that of Julia Streets in episode one, where she spoke about the need for enlightened leadership to ensure financial services are relevant.

Our guests have also shared the many reasons why they love financial services and spoken of its exciting potential to do great things. We’ll leave you with this from Rohit, “there’s some world-changing stuff that financial services companies and professionals working in the industry can do for people’s lives if they choose to prioritise and that is pretty awesome.”

As for the future? Well, we predict another series of the Upfront podcast. Stay tuned punks. 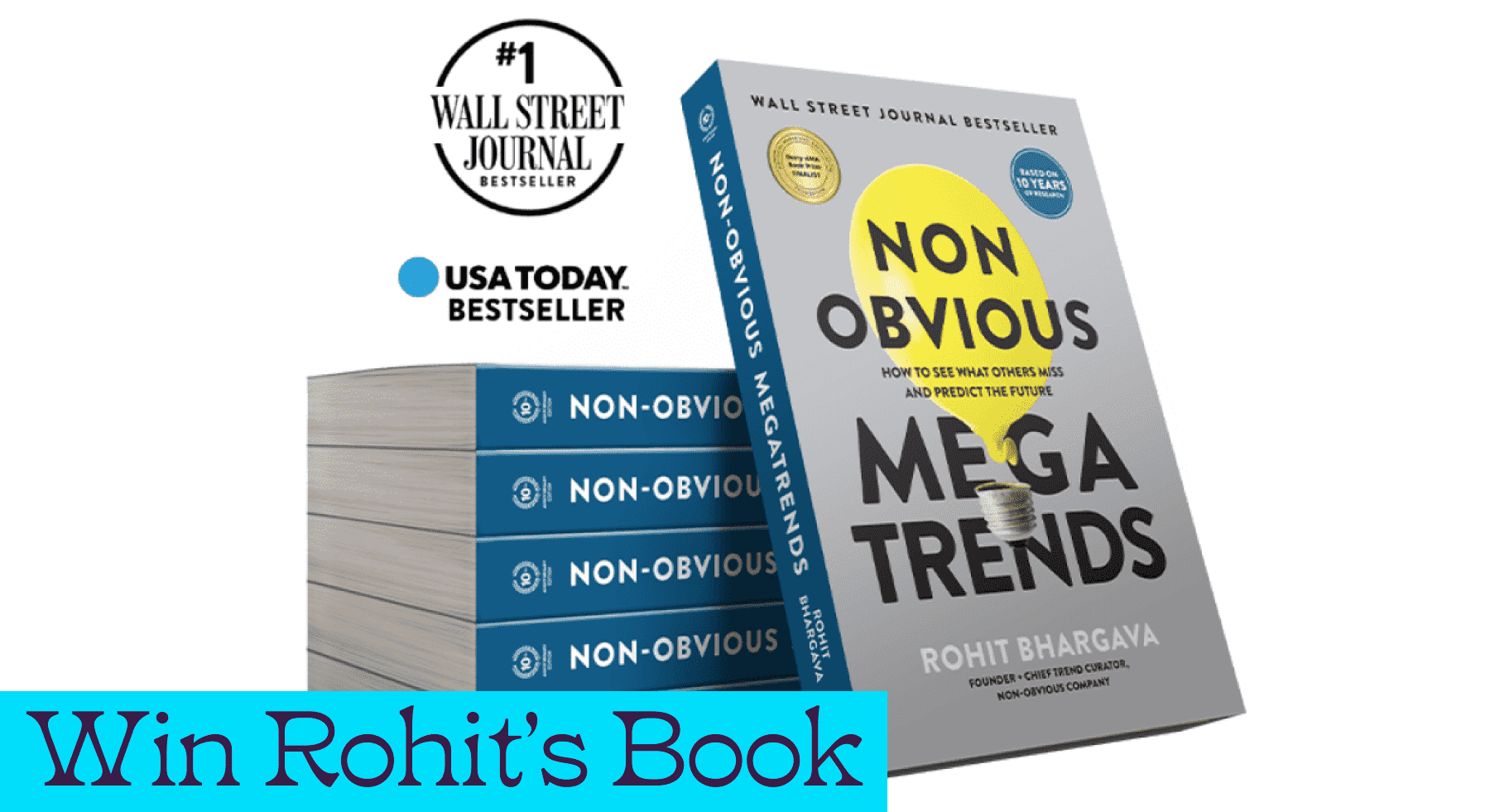 10 copies of Non-Obvious Megatrends up for grabs

Listen up, punks. We know you’re sad that the first series of your favourite financial services podcast has come to an end, so we’ve got a little treat to cheer you up.

We’re giving away ten copies of Upfront podcast guest Rohit Bhargava’s award-winning book Non-Obvious Megatrends - the book that will help you see what others miss and predict the future.

You’re going to want to enter this draw. Obviously.

To be in with a chance of winning a copy, all you’ve got to do is send us a line telling us what you love about financial services to upfront@iress.com by 30 November 2022. It’s that easy so do it now!

Upfront is brought to you by Iress, the tech people making it easier to love financial services.